Cutdown
in 1:1 format
for Social Media 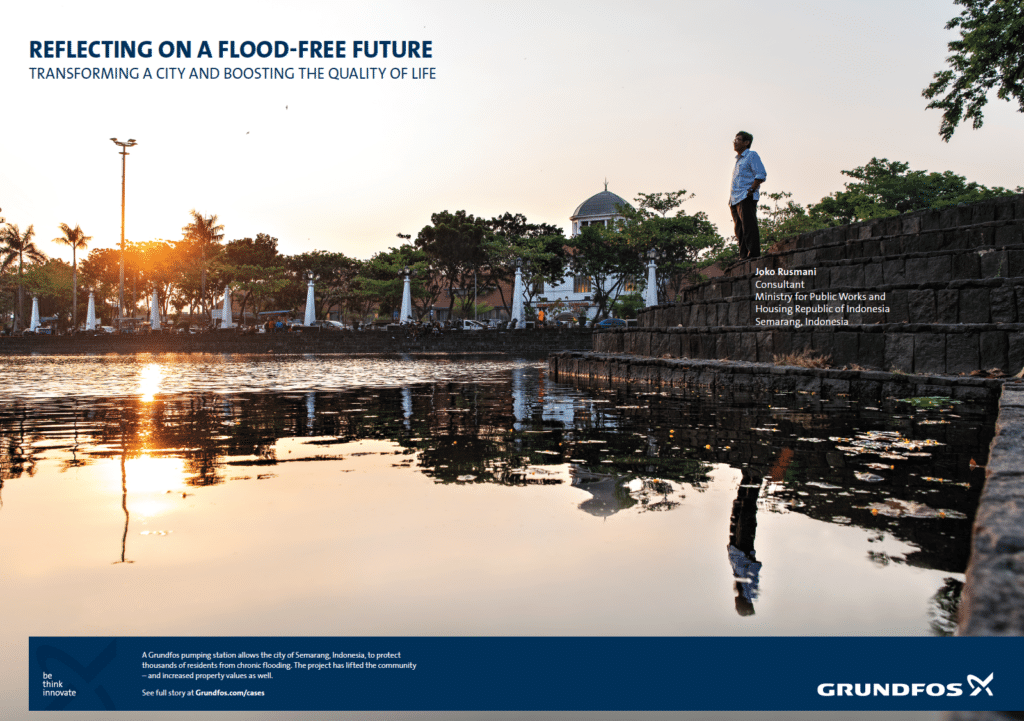 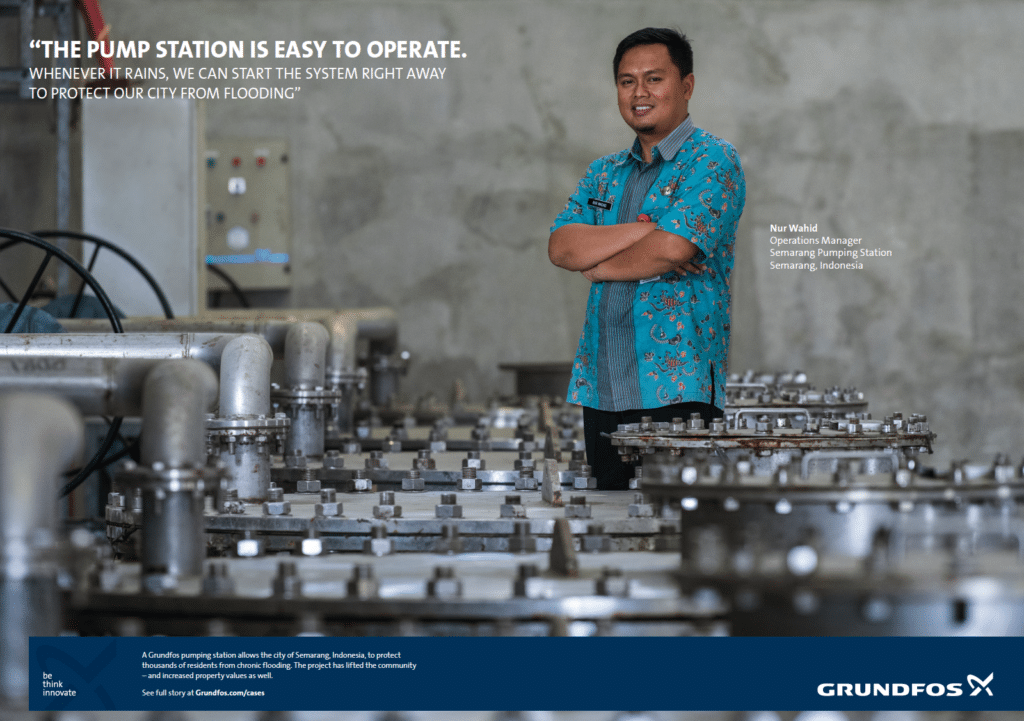 A Grundfos pumping station allows the city of Semarang, Indonesia, to protect thousands of residents from chronic flooding. The project has lifted the community – and increased property values as well.

The Indonesian city of Semarang used to suffer from massive flooding. Located at seaside, part of the city is under high-tide level. During heavy rainfall and high tides, uncontrollable water masses wreaked havoc on people’s homes and lives. The city has built a strong, unique solution with Grundfos to shelter its citizens from the floods. Since it was commissioned in 2014, it has kept flooding out of the affected river basins and city centre, increasing the quality of living – and property values – for citizens.

The city of Semarang, Indonesia’s fifth biggest city with a large commercial port, has suffered from flooding for many years.

Semarang lies low on the northern cost of Java. About a third of the city is under high-tide level, with ocean on one side and mountains surrounding the city on all other sides. Total area is about 13 square kilometres. A tropical rainforest climate makes it one of the wettest areas in the country – particularly during high tide.

The mix of high tide and rain was the worst, says Joko Rusmani, Consultant, Ministry For Public Works and Housing in Indonesia.

“When high tide occurred during the rainy season, water that was supposed to flow to the sea was blocked by the high tide, causing it to flow back and flood residential areas. It was a chronic problem.”

“Back then, even a little rain would cause flooding,” says Ari Soemantri, a resident who lives in Jalan Permata Merah, a central Semarang neighbourhood. “Heavy rains would bring flooding that lasted for days with no signs of receding.”

Land subsidence of up to 10 centimetres a year has made the situation worse. Joko Rusmani says this is due to too much groundwater extraction, combined with building construction that overburdens the soil. All in all, sinking lands, rain and high tides have been a problem in Semarang for years.

A new pumping station is changing that.

The project team sealed off the estuaries of the two main affected rivers – the Semarang and Baru rivers, says Joko Rusmani.

“And now, water coming from upstream will be stored in retention ponds to be pumped out,” he says. “So what used to be flowing gravitationally, we changed to a pumping system.”

He says the retention ponds can hold 130,000 cubic meters (m3), while the pumping station has a total capacity of moving 35 m3 per second, or 126,000 m3/hour. Reliability is absolutely critical. “Given that we now rely on pumping, we expect the pumps to be able to work 24 hours non-stop, to always function properly and to be maintained well, so that whenever we need it, water can be pumped into the ocean with no malfunction,” he says.

The project team chose Grundfos KPL pumps due to previous experience using similar kinds of pumps in Surabaya and Jakarta – and those had been operating reliably for more than ten years, he says.

“Because the pumps have huge capacities and were the biggest ones in Indonesia at the time, we asked for support from Grundfos headquarters in Denmark,” says Joko. “We made sure that the spare parts will be available locally for the next 15 years.”

Since the pumping station went online in 2014, it has functioned as expected, says Nur Wahid, Operations Manager. During the dry season, the on-site crew operates the pumps for an hour or two a day as needed to keep the drainage pond at its proper level and conduct daily maintenance on the pumps. “Thankfully, these pumps are very easy to operate. So whenever it rains, we can start the system right away,” Nur Wahid says.

Today, people who used to experience flooding in their homes and on the streets of the central city are now free from flooding. They no longer have to keep raising their dwellings to combat both land subsidence and regular flooding. “And the roads are now finally functioning as they should,” says Joko. “Back then, roads functioned more as waterways, but now they are dry. No more problems.”

He adds that the government can now develop infrastructure without the fear of damage due to flooding and tidal flooding. “Both social and economic aspects have begun to grow again in Semarang,” he says.

Joko says, “The Semarang pumping station solved the flooding problem for the central part of Semarang city. It can be used as an example or model to be applied in similar areas. We are proud because this has offered a solution and has been appreciated, and it sets an example for others. Many municipal governments in Indonesia facing the same problems have paid a visit to our retention ponds to study how they can tackle the same problems in a way that applies to their cities.”