Cutdown #1
in 1:1 format
for Social Media

Cutdown #2
in 1:1 format
for Social Media 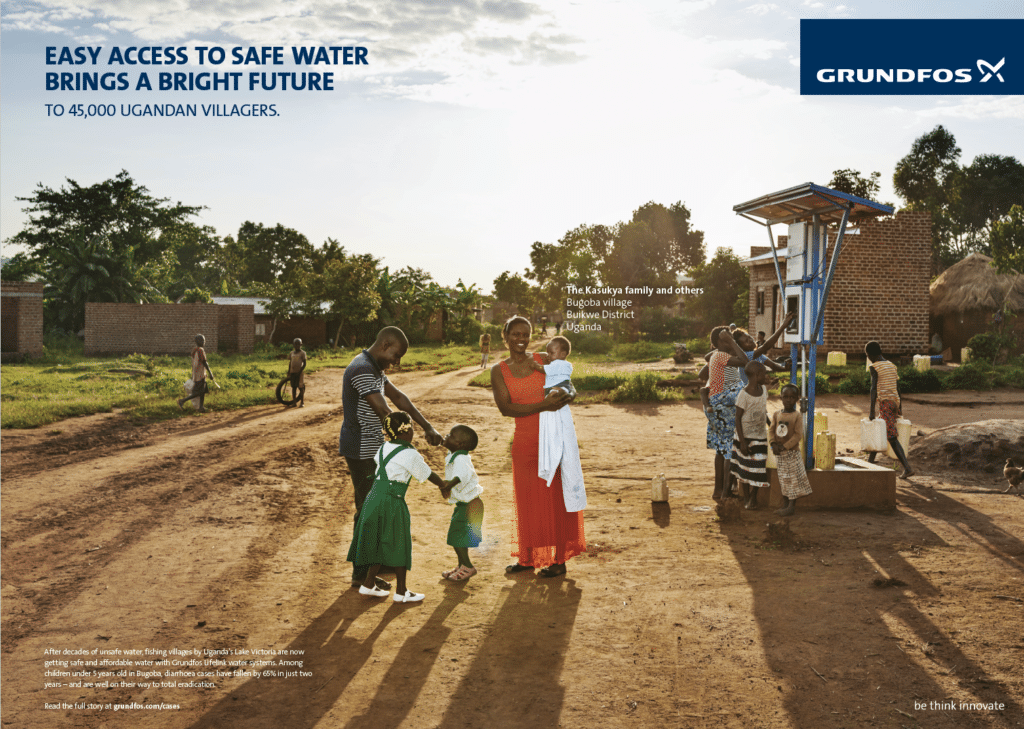 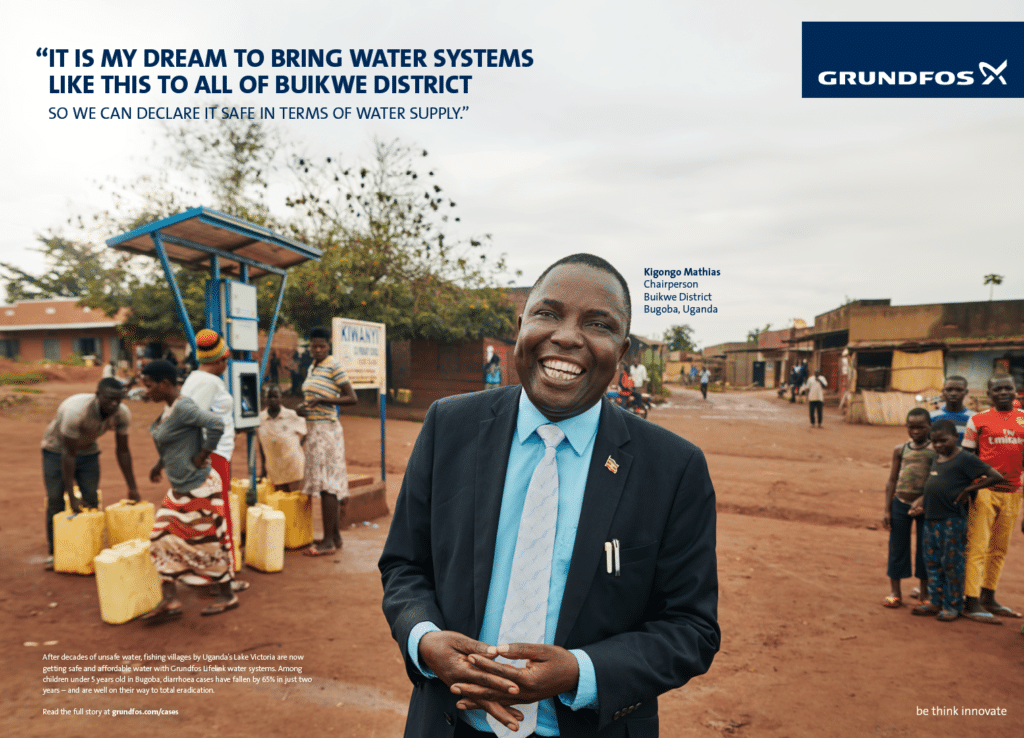 After decades of unsafe water, fishing villages by Uganda’s Lake Victoria are now getting safe and affordable water with Grundfos Lifelink water systems. Among all age groups in one village, diarrhoea cases have fallen by nearly half in just two years – and are well on their way to total eradication.

Rural Ugandan fishing villages along Lake Victoria did not have easy access to safe water. The lake is polluted from industrial waste and causes serious or deadly waterborne diseases when ingested. In 2015 the Iceland government funded a 4-year Water, Sanitation and Health (WASH) project to help the area. Iceland collaborated with the local Buikwe district government, NGO Water Mission Uganda and Grundfos, the solution provider. For one part of the project, the team drilled boreholes for safe groundwater and installed piped water systems with solar-powered Grundfos AQtap water ATMs in 39 villages covering about 45,000 people.

With this collaborative effort, after nearly two years the rate of sickness related to waterborne diseases is steadily falling. In Bugoba village, the number of diarrhoea cases among all age groups has reduced 45% from 2017-2019. Among children under 5 years old, it has dramatically reduced by 65%. Additionally, village water committees are taking over operation of the water systems. Payments for the water go towards operation and maintenance to secure sustainable, long-term operation.

Bugoba village (pop. 10,000) lies in a valley in Buikwe District in the hills above Lake Victoria in Uganda. It takes about an hour by four-wheel-drive from the city of Jinja to Bugoba over the red-earth and past sugarcane and cassava crops. The lake sits at the bottom of a long, sloping hillside – about a half-hour by foot from the village.

When Annet Kasukya came to Bugoba to marry her fisherman husband, she became one of many women and girls who walked down the hillside path to fill 20-litre jerrycans with water. Then she lugged them back home for cooking and washing.

“At first we thought the water was good because we used to take it,” Annet Kasukya says. “Then you became sick and thought it’s maybe mosquitoes. In the community, people were always sick. My neighbour died of bilharzia. His stomach was swollen. We did not know that it was the lake water affecting us.”

Her first-born daughter Hanifa – now six years old – got severe diarrhoea. “We spent a lot of money trying to get her better,” Annet says. “She became so dehydrated. It almost took her life.”

Some villagers thought that if they fetched water from deeper out into the lake, it would be cleaner. That brought its own dangers, including dangers of drowning and crocodiles. “The lake was not good at all,” she says.
There was a well, but it was a two-to-three-hour walk up the road in the other direction, and its water was not reliably safe. The other alternative was to buy water from local water vendors. They sold water in the village during the day for 500 Ugandan shillings (USD 0.15) per jerrycan.

“It was expensive. We could not afford that money,” she says. “We invested a lot in medical treatment for our kids and even ourselves when we got sick. We could not save any money that could help us in our daily lives.”

The lake had once been a good source of water, but over time industrial development and population growth brought pollution, explains Kigongo Mathias, Buikwe District Chairperson. “The lakeside communities began seeing increasing waterborne diseases, deaths especially among children, high medical bills and declining productive working hours. This started a negative spiral of poverty and retarded growth in young children. This was not desirable to individual households and the district government.”

There was no NGO present in the area, and the newly created district of Buikwe did not have funds to drill boreholes and prepare water schemes.

In 2015, the Iceland Embassy – based in Uganda’s capital city, Kampala – started researching the needs for starting a water, sanitation and hygiene (WASH) programme in Buikwe at the request of the district government.

Maurice Ssebisubi, Senior Programme Officer at the embassy, identified 39 established villages along the shoreline. From there, consultants assessed the area. “The biggest problem they found was that there was no clean, safe water,” he says. “Second, there were no sanitation facilities. Everything was open defecation. The communities were really badly off.”

For the water systems, the Iceland team started studying different options on the market. “We wanted something that could actually give us value for money, while ensuring that they had pumps, so that people would not stop having water, which is the blood of the community.”

The team visited several different off-grid water systems in rural Uganda. Each had its specific challenges – like those that used cash transactions. “Whoever collects the money, the money just disappears. And then if a pump breaks down for a week, someone just comes and takes it,” he says.

Other projects would have water flowing for six months, but then the tap would go dry. One system in northern villages used a community management model, but the residents struggled with revenue management. “We did not want to make the same mistakes,” he says.

It all changed when Maurice’s team visited a solar-powered AQtap “water ATM” in Kikondo near Buikwe. “We looked at the books, and we saw that it had been running for about three years. Whenever we’d go back there, we’d find water flowing.”

Water Mission Uganda, an NGO, had implemented the Lifelink solution with water ATMs in Kikondo. Iceland consulted with them and concluded that the best solution would be to connect the new water schemes with an automated water kiosk solution offering pre-payment, such as the Grundfos AQtap solution.
The government of Iceland had already determined the need to collect small payments for the water to ensure funds for operation and maintenance of the water systems. The Grundfos AQtap water ATM offered this with its WaterCard-based pre-payment and online water management system.

Thus, Iceland offered USD 6.7 million for a 4-year WASH programme that would conclude in 2019. The funds included 24 boreholes in 39 villages serving a population of about 45,000 people; solar-powered, submersible Grundfos SP pumps and RSI solar inverters; and 107 solar-powered AQtaps in the villages. Bugoba was one of the villages. It got three AQtaps in 2017.

By 2020, the Buikwe District Local Government will receive full ownership of the systems. “The communities have to be able to run the systems themselves,” says Unnur Orradóttir Ramette, Ambassador of Iceland in Uganda. “It’s a low-cost system, more or less maintenance-free.”

First, the community tests the borehole water regularly to secure it is safe. The safe water is pumped into tanks by solar power. From there, gravity distributes the water through pipes to the Grundfos AQtap water ATMs. The AQtaps are located centrally in the villages.

The villagers can collect safe water for their households and small businesses at the water points at any time of day or night with pre-paid WaterCards. It costs 100 shillings for 20 litres of water – that is the equivalent of about USD 0.03/20 l.

“We wanted a solution that would be cash-free and that would ensure transparency in the running of the whole system,” says Unnur Orradóttir Ramette.

Data from transactions and operations are processed and published online, as well as the operating data from the pumps. “It’s extremely easy to transfer money in the AQtap system compared to others I have seen,” says Maurice Ssebisubi. “And second, you manage everything online. The troubleshooting can be done online. We don’t need to call anyone.”

Maurice Ssebisubi adds, “All the money is centralised at the district, but people have WaterCards. Here we have a district official with an account where the money is banked. Everyone can see it. It’s all channelled to one person. With previous systems, it was channelled to different committees and treasurers, and the end result was that everything would just collapse. With AQtap, traceability has been really improved.”

He says the other big plus of the AQtap water ATM is its durability. “They have withstood the test of three years in these communities,” he says. “We haven’t had any issues. I always tell people, ‘These are the iPhones of water.’”

THE OUTCOME OF SAFE WATER

In Bugoba village where the AQtaps have been running for more than two years, villager Annet Kasukya says you can see a difference – everywhere you look. “The village is so clean. And we no longer see sick people vomiting or having diarrhoea. People have learnt how to be clean. To maintain cleanliness,” she says.

“The situation has changed a lot because now we have fresh water,” she continues. “The water is accessible. You can get it whether it’s at night or in the morning or at noon. I can afford the 100 shillings. I can buy 20 litres. It’s not that costly.”

She adds that now her family can save money on medicine and clinic visits, and her children can go to school. In Bugoba, local teachers say that the number of children enrolling in school has almost doubled after the villagers got access to safe water and sanitation.

According to the embassy’s preliminary data after just one year in 2018 throughout Buikwe District, the rate of sickness related to waterborne diseases fell 7%. The district does not yet have WASH programme 2019 data for all the fishing villages. But in Bugoba, the number of diarrhoea cases among all age groups has reduced 45% from 2017-2019. Among children under 5 years old, it has reduced 65%.

While the Iceland Embassy will do a full assessment of the project, initial figures show that safe water access in the district has grown to about 90% of the population, says Maurice Ssebisubi. “The aim is for total eradication of diarrhoea-related diseases in the villages by the end of 2019,” he says.

The district chairman, Kigongo Mathias, says he used to spend a lot of time visiting sick residents on his tours of the villages. That has changed today. He is impressed by the news from the local clinics.

“They don’t have a lot of work! And if we look at the medical drug stocks , the consumption has gone so low. That saves the government a lot of money,” he says.

“If I get more money, that is my dream,” he adds. “To make the entire district have such systems, so that we can declare that this district is very safe in terms of water supply.”

“We want to be able to provide affordable and safe water to hundreds of millions of people on this Earth,” she says. “It takes a collective effort to reach that goal. We have found a solution that seems to be working very well.”